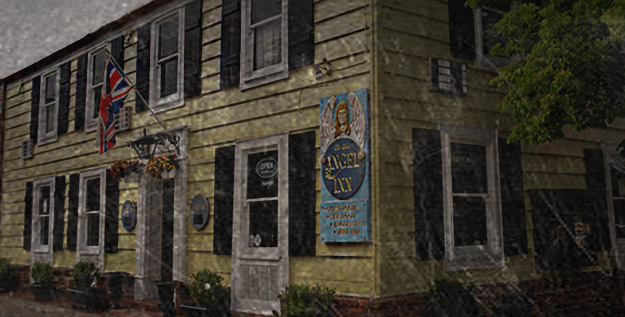 What you may not have immediately realised is that there’s more where that came from.

Niagara’s past is riddled with terrifying, twisted ghost stories. From forts to pubs, from tunnels to graveyards, visitors have lots of haunted spots to explore after experiencing the horrors of the Nightmares Fear Factory.

War never changes. From the Napoleonic Wars, to the Seven Years War, to the War of 1812, the mass production of corpses through violence and artillery and gunpowder has become almost industrial in scale.

There’s a reason Niagara-on-the-Lake is considered one of Canada’s most haunted towns. When the War of 1812 ripped through the area, it left plenty of ghosts in its wake. Bullet- or shrapnel-ridden and with unfinished business aplenty which binds them to the material world (take my word for it) these ghosts wander forgotten battlefields forever.

Most of them, anyway. Some few perished by more... personal means.

One of those ghosts is rumoured to wander the basement of The Olde Angel Inn.

The Ghost of the Olde Angel Inn

During the War of 1812, like all wars before it particularly between disunited city-states and factions, soldiers frequently changed sides. Greek hoplites during the Macedonian Wars against the Romans often fought for whichever side offered the greatest reward. Roman legionaries often fought for the General which offered them the highest value donatives. Turncoats abound, and war never changes.

The War of 1812 was the logical extension of the Manifest Destiny idea which has oft characterised the military goals of the United States of America. They sought endless expansion, and even long after the War of Independence continued to bring war to British colonies and possessions.

"Canada" as it is now called, was not spared this bitter taste of atrocity. During the winter of 1813 as United States forces advanced northward, many militia regiments turned coat against British landlords and sought independence of their own.

One such regiment, hoping to prove their allegiance to advancing American forces, decided to torch their own town—a town called Newark. Today, though, we know it as Niagara-On-The-Lake.

Nobody was spared. Sick, old women were dragged out of their houses to die in the snow as they watched their houses burn.

According to folklore, however, only one man rejected this decision. He nontheless decided to ignore ignores from the British high command to abandon his position.

He was in love.

His name was Captain Swayze.

Although he had been ordered to evacuate Niagara-on-the-Lake, the British Captain defied orders and stayed behind. For the love of the woman, and for loyalty to the British, he remained at his post.

This romantic choice would prove fatal.

Captain Swayze’s lover never arrived. American forces, however, came in large numbers. They joined with the traitors in burning the town.

Swayze rushed to take cover in the wine cellar of what is now the Olde Angel Inn, forcing his way into an empty barrel.

The town had already been encircled and it was too late.

American forces had seen Swayze enter the building. They followed, indiscriminately stabbing barrels with their bayonets. Wine poured around them as the blades pierced through barrel after barrel.

Captain Swayze had been killed.

Hauntings At The Olde Angel Inn

Ever since the pub was rebuilt in 1815, the Olde Angel Inn has hosted a great many ghostly encounters. From dishes rearranging themselves to eerie noises coming from an empty dining room, Captain Swayze doesn’t appear to have gone anywhere.

The basement where Captain Swayze was stabbed to death is now home to the washrooms of the Olde Angel Inn. Located right next to the cellar, incidents in these washrooms are unsurprisingly frequent. Phantom footsteps are often heard in the area, and one man even reported hearing someone use the stall beside him when no one was there.

A word of advice: Before entering the Olde Angel Inn, be sure to check that the Union Jack is hanging outside the front door. Captain Swayze’s ghost has been known to get angry if it is ever taken down, even briefly.

The Angel Inn is a great place to visit for local history, food, and hauntings, and is a great way to end a tour of haunted attractions in Niagara.

The best place to start? Nightmares Fear Factory. The scream-out-loud scariest haunted attraction in Niagara can be found right in the heart of Clifton Hill.

Buy your tickets online to save up to 35% off your admission.