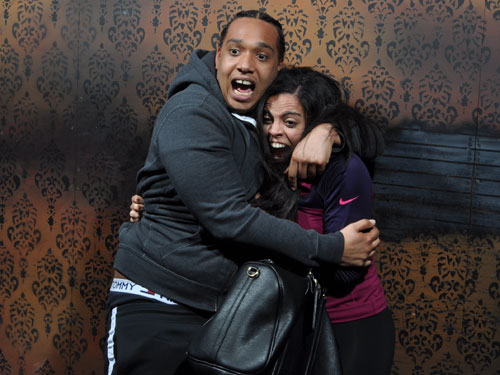 Why Do We Hug When We’re Scared?

At Nightmares Fear Factory, in Niagara Falls, Ontario, Canada, you will find out how brave you are.

Have you ever wondered, as you thumbed through the thousands of pictures of people being scared out of their minds in the Nightmares Fear Factory in Niagara Falls, Ontario, Canada, what it is, exactly, that seems to convince them that the best possible move when you’re in mortal danger is to grab hold of someone nearby?

Is it a sudden need for comfort that drives us? Do we need to make sure that our friends are safe and healthy? Do we need warmth?

You can see it happening over and over again on the website. You will see it happen at least once if you bring a friend on your trip to the Nightmares Fear Factory.

But why? Why would you cling to another person? It stops you from running, fighting, or doing anything other than grasping hold of another person. On the surface, doesn’t that sound like the worst possible thing to do?

Luckily for us, some Swiss scholars decided to run a survey study at the Nightmares Fear Factory in Niagara Falls, Ontario, Canada.

From the University of Neuchatel, results began to emerge as the scholars studied a series of pictures and reactions of the poor souls who have wandered the great cold darkness beneath the Nightmares Fear Factory. What they found is very, very interesting.

What they found is that the instant reaction to grab hold of a nearby human being when you are threatened is actually a form of self-preservation rather than an attempt to ensure the safety of someone else.

The study found that women and children were most likely to cling on to someone else, while men tend to display “fight or flight” behaviours which naturally require one to keep their hands and/or legs free depending on which one the man would go with.

As far as hugging goes, it is mostly displayed by women and children. There are a few theories as to why: one is that it is a method of hiding oneself from danger so that one has time to assess the threat or a method of dealing with the instantaneous shock of a coming attack.

The scholars are quick to point out that often, pro-social behaviours will follow this moment of self-preservation. People dove to save others as the Titanic sank, for example, and so on and so forth. They are also quick (as are we) to point out that this is a trend and doesn’t dictate behaviour so much as it indicates certain tendencies in some groups to do certain things.

So in the Nightmares Fear Factory, in Niagara Falls, Ontario, Canada, the question becomes: how will you react, down in the darkness? Will you try to save yourself? Or will you stand in front of others and face the enemy?

As a small, mildly prideful personal side note, I can tell you that the first time I confronted the Nightmares Fear Factory, my reaction was definitely “fight.”

So come down to Nightmares Fear Factory, in Niagara Falls, Ontario, Canada, and find out how brave you are.