You walk out of the Sheraton on the Falls Hotel on Falls Avenue, Niagara Falls, Ontario.

You’d been in kind of a haze on the way in. Maybe it was jet lag. Maybe you were tired. Maybe you were in the zen state of “just driving,” but the details of the city slid past you in a jumble of bright colours.

They were, to be fair, very bright colours.

Because you were starving, you wound up in a jungle-themed restaurant after turning down Clifton Hill. It was called the Rainforest Café, and the Misty Mountain Chicken Club, with its delicious spices, crisp bacon and piquant sauce seems to have resurrected your senses. 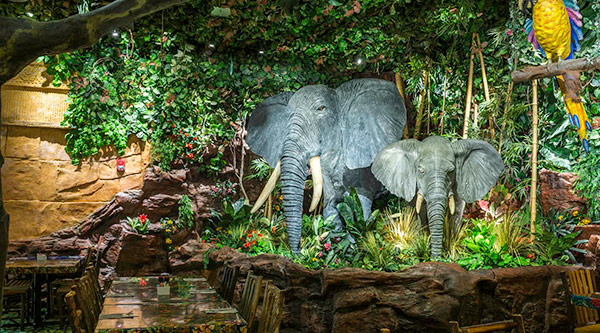 When you step out the front door to do some exploring, the horizon begins to darken as the sun slides below the skyline.

As it does, Clifton Hill springs to life.

The first thing you notice is the Niagara Brewing Company, and you make a note to visit later. In the meantime, the light of the enormous Ferris wheel has created, from the gathering darkness and rising neon light, a giant gorilla standing on what appears to be a building in the middle of falling over, somewhere ahead.

That, you think to yourself, I have to go and see.

What you wind up in front of is two things. The gorilla is standing on the spectacular façade of a falling building, which turns out to be a functional building: home to Ripley’s Believe-It-Or-Not Museum.

On the other side, a massive effigy of Frankenstein enjoys a hamburger while perched atop a Burger King. The House of Frankenstein carries a dark aura. Its windows are tinted, doors menacingly coloured. Yet still, the House beckons you within with the promise of its terror. 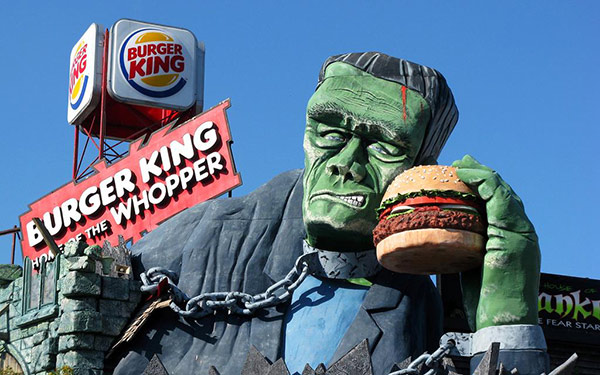 Grudgingly, despite this challenge to your bravery, you want to see what else there is in Clifton Hill. So, onward.

On the intersection of Victoria and Centre in Clifton Hill, things turn darker. The bright, carnival colours of where you had been are swallowed ever-so-slightly by shadows, and you can vaguely hear the sound of screaming from inside two buildings, one down the road to either side.

If you turn left, Screaming Tunnels Haunted Playgrounds beckons. If you turn right, the hideous Nightmares Fear Factory ejects panting, desperate groups of people sometimes still shaking from the experience of its premises.

As you turn around to take your journey in again, flashes of image sear their way across your memory. The Niagara SkyWheel. The Fear Factory. The House of Frankenstein. The Rainforest Café. You remember seeing a Hard Rock Café, which also looked interesting.

Restaurants and restraurants abounded along Victoria Avenue: Burger King, The Works, Mama Mia’s Italian—anything you could be in the mood for.

As you prepare to re-enter Clifton Hill, where you go next is an open and tempting mystery.

We hope you enjoy it.

3.  Top 10 Thrill Seeking Things to do in Niagara Falls